Love Triangles in YA by Kim Baccellia 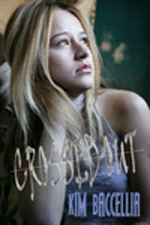 I love reading a book where the main character is involved in a love triangle. In these stories there always seems to have the boy who’s too good to be true. He’s faithful, loving, and looks out for the heroine. Of course she’s either oblivious to him or doesn’t know he exists.
Then there’s the bad boy. You know him as the mysterious guy who waltzes into the heroine’s life and steals her heart. If he’s written well, he’s not just dark and bad. No, he’s also vulnerable enough that we love him too.
Some examples:
Elena, Stefan, and Damon from VAMPIRE DIARIES:

Stefan is sensitive, loving, and only drinks animal’s blood. Sure later he reveals that he has his own dark secret but for a vampire he’s basically pretty good. Elena is in love with him but then his brother Damon shows up. Dark, mysterious, and yes, he has a history of being blood thirsty. He’s totally a bad boy but there’s times when his mask slips and we’re drawn to him. There’s one dance scene where Damon steps in for Stefan. Neither Elena or Damon touch but the chemistry between the two sizzles.

Buffy, Angel, and Spike from BUFFY THE VAMPIRE SLAYER: 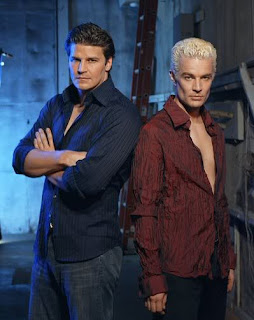 At the beginning, it was all about Angel. He’s brooding but caring and loving with Buffy. Well, until he sleeps with her which unleashing a curse that turns him back into a murderous vampire. Spike at the beginning of the show was totally bad. Then later, he changed. Maybe it was that forced chip in his head but somehow he looked at Buffy differently. And he fell hard for this vampire slayer. I think Buffy also loved him. It’s like Buffy told Giles, “Spike can be good, now that he has a soul.”


Whether you’re team Edward, team Jacob, or team Switzerland, you have to admit the love triangle makes this story. I’m totally team Jacob. I loved his character in all the books which carries over into the films. Edward is the caring, loving vampire that Bella decides to be with. Personally, I think she should have chosen Jacob. But that’s just me! 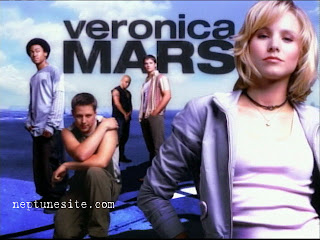 Poor Veronica. The love of her life Duncan Kane ends up dumping her. She can’t seem to get over him. Then her BF Lily, sister of Duncan is murdered. She tries to solve the mystery. Bad boy Logan Echolls, Lily’s boyfriend, blames Veronica for the death and harasses her. But there’s chemistry between both Veronica and Logan which in the later season boils over. I still kind of wished Veronica and Logan could have worked out their issues. But the show got canceled.

Stephanie, Dylan, and Mark in CROSSED OUT:

ephanie is best friends with Dylan. She senses he wants more than just friendship though. She starts feeling emotions toward him that she brushes off.
Then Mark shows up. He’s mysterious, dark, and is the gossip of Sutter High. Even Cura, Stephanie’s best friend, thinks he’s hot. Stephanie is fascinated by him. She can’t get him out of her head.

To find out whom Stephanie chooses and what the consequences are of her choice check out my YA paranormal CROSSED OUT
Also available at Amazon:
Posted by Hannah Howell at 3:55 AM